Staff at our office in Ayr, which opened in November 2015, nominated the charity and will be supporting them and fundraising in 2016.

Grant and Adrienne Currie from the Lauren Currie Twilight Foundation were guests of Damian White, Digby Brown partner and head of the firm’s Ayr office, at an event held on Thursday (14th January) to mark Digby Brown opening in Ayrshire. 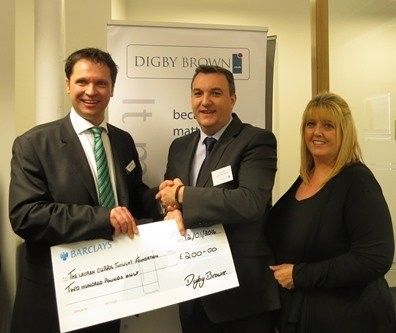 At the event, Damian White presented a cheque for £200 as an initial donation in support of the foundation’s work. The next few months will see the local Digby Brown Ayr team supporting and fundraising for the charity in various ways.

“On behalf of The Lauren Currie Twilight Foundation, we are absolutely delighted to be the chosen charity of 2016 of the Digby Brown, Ayr branch. Having the support of Scotland’s largest personal injury practice, as a corporate supporter, helps to advance our public awareness of Vasculitis and generate much needed funds for scientific research, patient support and general awareness.”

“Digby Brown are proud to be in Ayrshire and committed to being an active part of the community.  The Lauren Currie Twilight Foundation are an inspirational organisation and I am pleased our team have chosen them as our charity of the year. All of us are looking forward to supporting the charity in lots of different ways over the next few months.”

“Throughout the year, we work alongside brilliant organisations who make a real difference to people’s lives across Scotland.  We are proud to have won national awards for our work in this area, but what matters most is helping support organisations like the Lauren Currie Twilight Foundation.”