The dangers of asbestos exposure and the threat asbestos poses to people of all ages throughout Scotland today were the main themes of a conference held in Glasgow last week on Friday 21st April.

Glasgow’s Science Centre was an appropriate venue for an event held to highlight that asbestos exposure and asbestos related illnesses are not relics of our industrial past but a public health issue affecting individuals and families in Scotland today.

“Asbestos: Challenges today and the threat to future generations” was organised by two asbestos support groups Clydebank Asbestos Group and Asbestos Action, and the event was supported by Digby Brown Solicitors.

The event was opened by Bob Dickie from Clydebank Asbestos Group, who introduced a short film showing the difference the organisations’ vital work makes, a theme which was echoed by Douglas McAllister, Provost of West Dunbartonshire Council. 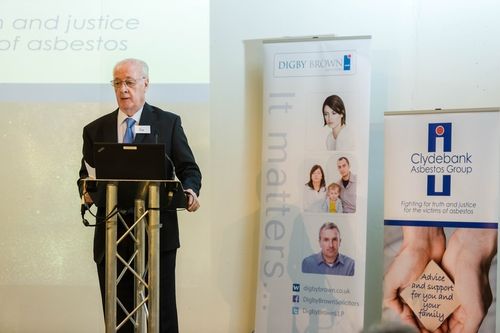 Legal victories on behalf of victims of asbestos exposure

The presence of asbestos in school buildings and the urgent public health threat it poses in Scotland was the central theme of the afternoon session.  The conference heard from Sarah Lyons, an official with the National Union of Teachers and a member of the Joint Union Asbestos Committee (JUAC) in England and Wales.

Sarah Lyons discussed the results of a recent JUAC report which showed that asbestos is still present in up to 75% of schools in England, and the work the group has done to raise awareness of the public health threat in this area, including securing a Department for Education review of its Asbestos Policy for Schools and new guidance to schools on dealing with the threat.

John Fearn and Dianne Foster from Asbestos Action discussed their work campaigning to raise awareness of asbestos exposure as a public policy issue and the wide range of support that individuals and families can need after diagnosis of an asbestos related condition. 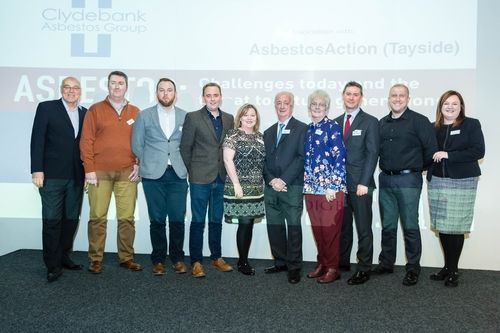