Simon Hammond joined Digby Brown as a trainee in 2005, qualifying in 2007 and becoming an Associate in 2011.  Simon has extensive experience of both the Court of Session and Sheriff Courts and a particular expertise in work related accidents and representing clients affected by health and safety at work related-issues.

David Nellaney has also developed his career with Digby Brown, joining the firm as a trainee in 2004 and becoming an Associate in 2011 prior to being made a Partner. He specialises in workplace, road traffic accident and public liability claims and has played an active role in developing Digby Brown’s Compensate Personal Injury Network, which now has over 350 member firms across Scotland.

Colin Moffat is another in this round of promotions who has been with Digby Brown for his whole legal career, joining as a trainee in 2008.  Colin is known and recognised for his committed and highly regarded analytical approach.   In his new role as an Associate, Colin will play an important part in the ongoing development of Digby Brown in Ayrshire and the south west of Scotland. 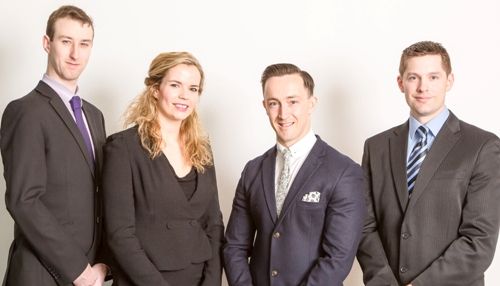 The promotions mark a positive start to the new financial year for the firm who wrapped up 2014/15 by winning five categories at the recent Scott & Co. Scottish Legal Awards, including Firm of the Year, Litigation Team of the Year and Employer of the Year.

Announcing the promotions, Digby Brown Chief Executive Fraser Oliver highlighted that they reflect Digby Brown’s commitment to helping its staff develop their careers within the firm.

“It is a pleasure to announce these promotions. Simon Hammond and David Nellaney both have strong areas of expertise, a track record of representing people in difficult and demanding situations and are already leading teams and developing our business. Along with the other Partners in the firm, I am looking forward to working alongside them as we continue to grow and develop.

“Kirsty O’Donnell and Colin Moffat have both added enormous value, both to their clients and to their teams and colleagues, since they have been with us. Their promotions to Associate are a reflection of this and both have important roles to play in the coming years.

“These promotions are also a reflection of our commitment to looking after and developing our people. This ethos is at the core of our business and was central to us being named Employer of the Year at the recent legal awards. We have talented, enthusiastic people across Digby Brown and we want to help each of them reach their potential.”