Digby Brown campaigning for victims of stalking and harassment

Digby Brown Partner Kim Leslie was recently among the speakers at an important conference on the dangers of stalking, and what victims and vulnerable individuals can do to protect themselves, led by the charity Action Against Stalking.

Kim Leslie joined Ann Moulds, founder of Action Against Stalking, and former Lord Advocate Elish Angiolini at the event and discussed the barriers to justice which still prevent victims of stalking from seeking protection and legal redress.

Ann Moulds set up Action Scotland Against Stalking after enduring a terrifying two-year ordeal at the hands of a stalker, who was convicted but given a lenient sentence. 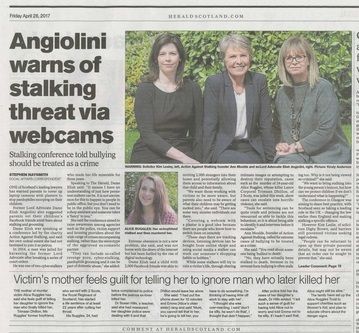 Coverage of the conference in The Herald newspaper, featuring Kim Leslie, Ann Moulds and Elish Angiolini

Ann launched a civil court action against her stalker and changed the legal landscape in this area in Scotland ahead of the rest of the UK through Section 39 of the Criminal Justice and Licensing (Scot) Act 2010, which allows prosecutions for stalking crimes based on the stalker’s behaviour and its effects on the victim.

Kim Leslie was Ann’s legal advisor and representative in her civil court action.

‘Restoring the Balance of Justice’ campaign

In 2014, Kim and Ann helped create the 'Restoring the Balance of Justice' Campaign which seeks to identify the barriers to justice faced by victims of stalking, harassment, domestic abuse and sexual crimes and work with the criminal and civil justice systems, the Scottish Government and others to seek ways to overcome these to help and protect vulnerable people and victims of serious crimes in Scotland.

The campaign, which continues today, is supported by a number of legal experts and victim support groups.