Digby Brown were delighted to support Edinburgh Young Drivers at the Corn Exchange last week, a great four day event helping 5th and 6th year school pupils across Edinburgh understand what they need to do to be a safe driver.

Every week in Scotland an average of 54 drivers aged between 17-25 years old are involved in a road accident.

As part of our continued support for this fantastic event, we offered school pupils the chance to win 10 driving lessons, worth more than £200.

How did pupils enter the competition to win 10 driving lessons? 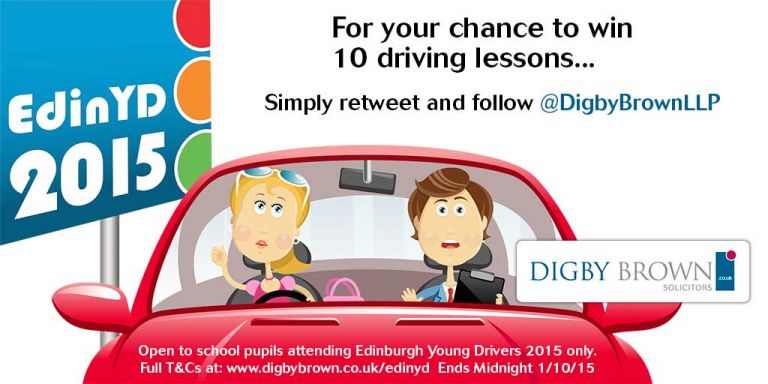 To make things even easier, we also posted the tweet daily so pupils could easily find the tweet they needed to retweet.

An impressive 173 entries were received and the winner - Chelsea Baxter - was drawn and announced on Friday 2nd October.

Digby Brown also held a mock court at Edinburgh Young Drivers which was based on a real case to highlight the consequences of irresponsible driving. The mock court was held multiple times a day and was both interactive and entertaining.

The court featured lawyers from the Digby Brown Edinburgh office and a police officer from Edinburgh. The road traffic crash was presented from a variety of perspectives including the passenger who was seriously injured in the crash, the driver who caused the accident, the mother of the injured passenger and the police officer attending the scene.

We asked school pupils to participate and take on the role as the driver who caused the crash. At the end of every court session, pupils were then asked for their opinion on what penalties the driver should receive before hearing the verdict that was actually awarded in this case, and what could have been awarded as the result of careless driving. 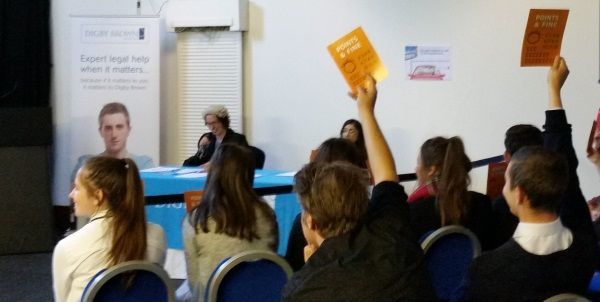 We also had a stand giving away free road-safety themed goodies such as reflective slap wraps and seat belt pads.

Every day at Digby Brown Solicitors, we see first-hand the consequences of accidents on the road. We are committed to doing everything we can to make roads across Scotland safer. We hope that Edinburgh Young Drivers event helps – in a fun, interactive and informative way – give young adults across Edinburgh the information they need to stay safe on the roads.