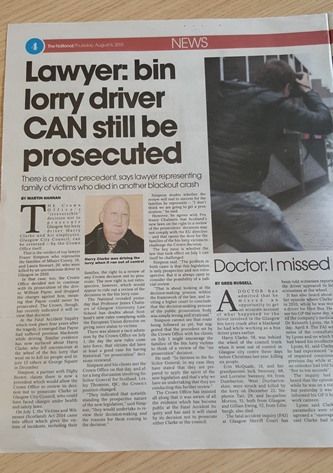 In an article published in today's The National newspaper, Digby Brown Partner Fraser Simpson discusses the law around prosecutions in Scotland. The issues covered in the article have been the subject to extensive recent discussion.  Digby Brown Partner David Wilson is representing one of the families affected by the Glasgow bin lorry crash in the ongoing Fatal Accident Inquiry into those events.  David has also shared his expertise regarding FAIs in the media in recent weeks. Dorothy Bain QC is acting for Digby Brown and the victims of the tragedy that we are representing.

Fraser Simpson represents the families of Mhairi Convy and Laura Stewart, who were killed by an unconscious driver in 2010.  A Fatal Accident Inquiry (FAIs) into their deaths was held in 2014 and a determination issued last November.  Fraser has developed significant expertise in this area of law.  The article covers decisions by the Crown Office and Procurator Fiscal Service not to launch prosecutions and the recent introduction of a prospective 'right to review' such decisions in Scotland.

The article appears on page four of 'The National' and can also be read online.