This Sunday (20th November) sees Scotland’s first ever cross-border amputee football league tournament being held in Glasgow and Digby Brown are delighted to be supporting the event.

The sport has only existed in Scotland since earlier this year when a pilot project was run by Scottish limb-loss charity Finding Your Feet (FYF), who are the charity partner of Digby Brown’s Glasgow office.

Our Glasgow team have been fundraising to support this work of this incredible charity for more than a year.

The tournament on Sunday kicks off at midday at Springburn Park, Broomfield Rd, Glasgow and is open to the public. There will be children’s entertainment, a junior training session and the option for spectators to give amputee football a try. 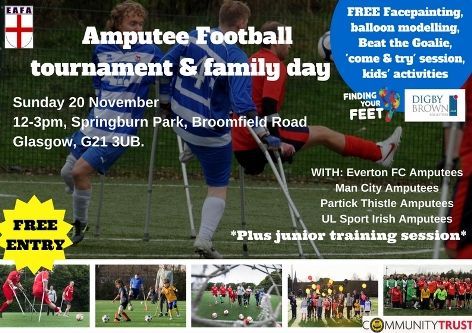 "Amputee Football Association Scotland has been set up to expand the sport in Scotland. Working with Scottish football’s governing bodies, our objective is to raise awareness and accessibility of the sport north of the Border.

“The training at Partick Thistle has been a great success and taking the sport to other SPFL clubs is the natural next step in building a league in Scotland. We’re appealing to anyone with a lower or upper limb amputation or limb difference to come and give it a try at the tournament.

“We’re hugely grateful to Digby Brown for their support in ensuring this tournament caters for every age group. The funds they have raised throughout the last year for Finding Your Feet will ensure we can continue providing opportunities across a range of sports for those who have lost limbs.”

“We’ve really enjoyed supporting Finding Your Feet and watching the amputee football programme grow and flourish over the course of the year.

“We have been working hard to raise vital funds for the charity so they can continue getting people back on their feet after limb-loss through a range of sporting and social initiatives. Being able to support the first cross-border amputee football tournament in Scotland and to see everyone’s efforts come to fruition is the icing on the cake.”