Our client, Mrs Anderson, was involved in a road traffic accident when she was travelling home from work along the A947 Banff to Aberdeen road.

The Banff road is notorious in the local area. There have unfortunately been a number of accidents and fatalities on this road.

Mrs Anderson saw an on-coming car come around a bend and lose control. Her immediate thought was that the other car was speeding. The driver lost control and swerved into the path of Mrs Anderson’s car and hit her head on.

Mrs Anderson’s car was written off due to the damage and the other driver’s car ended up in a nearby field.

“I was sitting in what only could be described as the wreckage of my car.

"I looked to the left and seen that the passenger window was all smashed and the windscreen was completely smashed.” 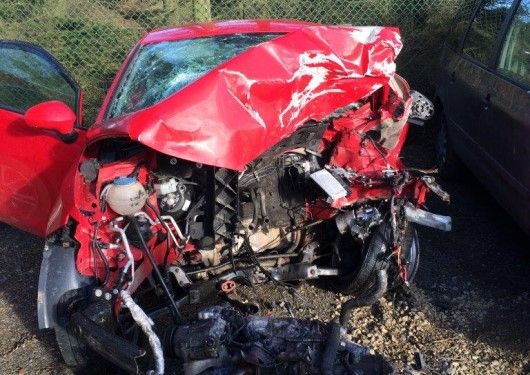 Mrs Anderson was taken by ambulance to nearby Aberdeen Royal Infirmary. She had broken her wrist in two places. She had a hairline fracture in her right ankle, a deep laceration to her left knee and bruising across her pelvis from the seatbelt.

Guided through the claim process

Our personal injury solicitors in Aberdeen were able to guide Mrs Anderson through the claims process, advising on what she could claim for and gathering expert evidence to support her road traffic claim.

“Guidance throughout the claim was very much appreciated having never been through such a process.

"Being in an accident is distressing enough without having to deal with everything that comes afterwards.

"I was exceptionally grateful to have Digby Brown’s help through the process.”

The insurance company initially offered £15,000 in compensation, which was an enticing offer.

But this was before any medical evidence had even been collected.

When our team obtained a medical report from an Orthopaedic Surgeon, this gave an accurate prognosis in respect of Mrs Anderson’s injuries. Once this report was disclosed to the insurance company, they returned with a significant increase in the compensation offer - by over £10,000.

As part of Mrs Anderson's claim, she was able to be compensated for the care she received from her husband in the weeks after the accident and expenses such as the wrist support and wrist warmers that she had bought.

Our solicitors also got in touch with the police and the other driver’s insurance company to get answers. His insurers were reluctant to reimburse Mrs Anderson for her insurance excess, which had been deducted by her own insurers when they sent her the cheque for the pre-accident value of her car.

“I have been very impressed by the service, attention and perseverance given towards my claim. It is very much appreciated and I have had full confidence that Digby Brown had my best intentions throughout the last year.

"Your communication has been great, I never felt like I had been forgotten about.

"Again, thank you so much for all your help over the last year and I wouldn't hesitate to recommend (and actually have!) your services to anyone that may be in a similar situation.”