On 29th January 2022, the long-awaited changes to the Highway Code took effect. These changes have been introduced to make active travel easier and safer for everyone.

The Department for Transport says the new system will pave the way for a “more mutually respectful and considerate culture of safe and effective road use.”

What are the major changes to the Highway Code? 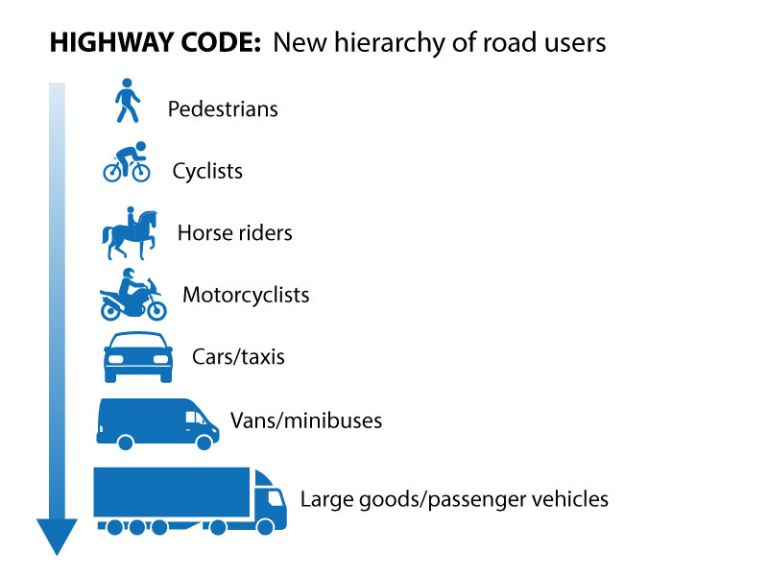 For example, all road users like cars and cyclists are likely to cause more harm to a pedestrian than the other way around, and are therefore expected to be more vigilant on the road.

Since the introduction of these changes, concerns have been raised, particularly from drivers, who note that cyclists and pedestrians may believe that the onus for their safety rests with others and that they may take greater risks when using the roads.

However, the concept of this hierarchy is not new in road traffic accident claims. The update does not instantly absolve responsibility of a more vulnerable road user.

All road users are still expected to treat each other with consideration and the introduction of this hierarchy does not reverse the burden of proof or create a presumption of fault against the road users further down the hierarchy.

Before the new rules came into place, drivers had priority at junctions unless a pedestrian was already crossing the road.

However, drivers now have to give way to pedestrians waiting to cross the road when turning into a junction.

As well as the codification of a hierarchy, road users have voiced concerns over this major change debating whether it could cause more collisions.

This is perhaps one of the most controversial changes as it relies on all road users alike knowing that this change has occurred. If a driver isn’t aware that pedestrians have right of way at a junction and continue without pausing, but the pedestrian believes the driver is going to stop, and they proceed…a very dangerous situation can unfold.

There is also concern that this could cause major traffic delays at busy junctions such as in city centres – or during the Edinburgh Fringe.

Cyclists on the road

There has always been tension between drivers and cyclists on the road. And the new rules for cyclists has sparked this feud further.

One of the changes up for debate is that cyclists have been advised to ride in the middle of the road when approaching junctions, when riding in slower-moving traffic and on quiet roads, to make themselves more visible. However, there is concern this will lead to more road rage incidents putting cyclists at harm as drivers may believe a cyclist riding in the middle of the lane is deliberately trying to slow them down.

There is also priority to cyclists going straight ahead at junctions - unless road signs or markings say otherwise - and going around a roundabout. Drivers are told they should not overtake a cyclist within the cyclist's lane and they should give way to allow a cyclist to move across their path as they go around the roundabout. Cyclists can also stay in the nearside lane - but they must signal that this is their attention to other road users.

For drivers, this means again, they need to first be aware of these changes. Otherwise, it puts cyclists at risk if they cycle across to the driver’s lane at the roundabout, expecting them to just give way as they ought to.

The Highway Code must evolve to keep up with the changing nature in which people use the roads. These changes that have been introduced reflect the long-standing principles that the Courts have adopted when determining liability in road traffic accidents.

As a firm, we are well aware of the impact that road accidents have on all road users. We welcome the changes which encourage a prevention-first mindset and hope to see a reduction in the number of accidents, particularly those involving vulnerable road users.