The Highway Code, see Rules 170-183, is clear in that those already established on the main carriageway have priority to those wishing to join.

However, if you were in a cycle lane on that main carriageway, would you be expected to give way to those wishing to join from a side street?

Well the answer here depends on your local authority and the priority of the cycle lane.

Stirling Council is one of these local authorities that have decided to create new cycle lane with markings indicating "give way” on some of their pre existing cycle lanes throughout their road network. 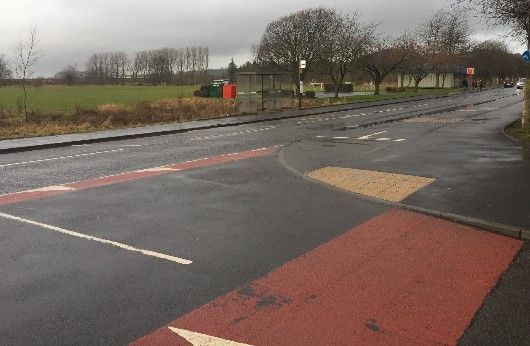 At these junctions, cyclists should give way to cars if cycling in the cycle lane. The cyclist must therefore check the way is clear of other road users before proceeding. The priority is passed to the other road user wishing to join the main carriageway and away from the cyclist.

Of course, if the cyclist chooses not to use the cycle lane and cycle on the main carriageway then they do not have to give way. See more about the rules of using a cycle lane at Cycle lanes – to use or not to use?

It could be argued that these give way cycle lanes do not follow the rules of the Highway Code. It can be confusing for all road users, and therefore dangerous. While consideration has to be given to sightlines at the junction for motor vehicles on their approach there is perhaps a safer alternative here to re design the junction altogether or even cut away nearby trees for example.

For now though, we would suggest that if you are using a cycle lane to be alert to these new markings popping up.