Bride secures £30,000 after breaking ankle at hot tub hen do

A BRIDE whose wedding was ruined after a slip on mouldy hot tub decking left her with a broken ankle has secured £30,000 in damages.

Laura Laing, 30, suffered the injury while staying with friends at a cabin in Dunoon, Argyll & Bute as part of her hen do.

The administrator from Gracemount, Edinburgh was left wearing a giant moon boot cast on her big day and although she managed to “hobble” down the aisle she was unable to finish her first dance – and was even wheelchair-bound on her honeymoon.

But after raising an occupier's liability claim Digby Brown was able to secure an admission of liability from the cabin owner and an out-of-court settlement which helped Laura recover her losses.

Our client, Laura, said: “We planned everything for months so to have it all go south because of slipping on mould was frustrating and upsetting all at the same time.

“I knew immediately something was wrong as my ankle was pointing the wrong way.

“I remember crying and wondering what this meant for my wedding and the honeymoon.”

“I was in absolute agony but missing out on so many experiences like my first dance with my husband probably hurt more than my ankle.”

Laura and 10 friends arrived at Clydeside Villa in Dunoon on 15 February 2019 after booking a £700 three-day stay on Air B&B.

But at midday on the second day the trip was cut short when Laura – who was sober – slipped on the decking.

Worried pals called an ambulance where Laura was taken to three different hospitals in two days.

First to Dunoon Hospital for initial treatment before being transferred to Inverclyde Royal Hospital in Greenock via the ferry.

From there she was taken to the Royal Infirmary of Edinburgh for surgery on February 17.

She was kept at the RIE for three days to recover from having plates and pins attached to her ankle before being discharged in a moon boot with crutches.

A few weeks later on March 23 Laura then married her partner Calum Laing, 27, at Edinburgh City Chambers before hosting a reception at Inch Park Community Sports Hub – but the day was unlike anything they planned for.

Laura said: “I didn’t get the experiences you would normally get in the run up to your wedding so I missed out on shopping for make-up and perfume for the day.

“I had to buy trainers so I could wear one on my right foot so I could at least hobble down the aisle with my dad.

“I didn’t need to have my dress altered but it did get damaged because it caught on the velcro of the moon boot.

“Our first dance was to the song “Would You Be So Kind?” by Dodie Clark but I only made it halfway through before having to be literally carried off.

“I’m glad we didn’t decide to have a ceilidh as that would have turned out pointless.

“I then spent most of the night sitting. I couldn’t greet people because I couldn’t move and I couldn’t even have a glass of champagne because of the painkillers I was on.

“But I tried to find the positives on the night because at the end of the day I did still get to marry my amazing man.” 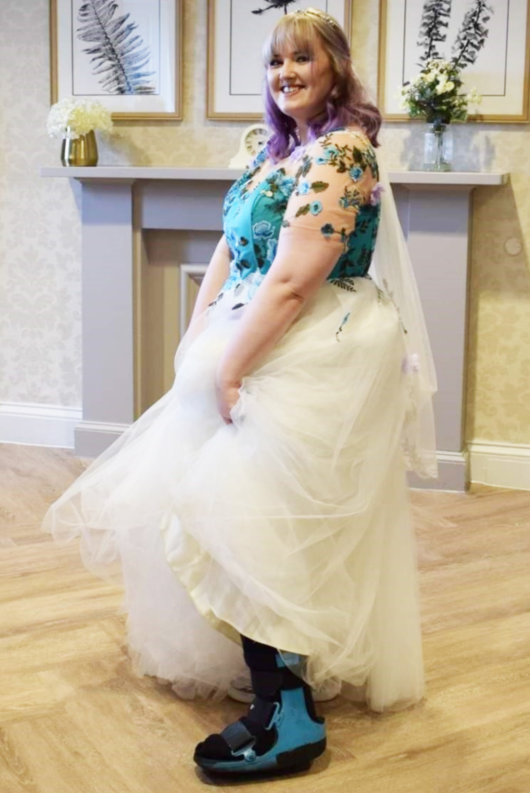 Two months later in May 2019 the newlyweds went to Disney World in Florida for their honeymoon.

But with continued pain and mobility issues Laura was confined to a wheelchair and the crowds prevented her from safely using crutches – the pair also lost out on pre-paid trips.

When they returned Laura relied on extensive physiotherapy to help with ongoing pain that stopped her sleeping and driving.

She now has two permanent surgery scars on her ankle – one 10cm and the other 5cm – and has not been able to return to her hobbies of cycling, swimming or hillwalking.

Laura said: “It’s all been a bit of a nightmare to say the least but my recovery is coming on well and maybe in the future I’ll finally be able to have some kind of gathering again where I can finally enjoy what I missed out on.

"I'm really grateful to Catriona and Digby Brown for all the help."

The owner of the villa admitted liability after it was argued they failed remove the mould build-up as it was a “reasonably foreseeable hazard”.

Catriona said: “Being robbed of what is meant to be one of the most memorable days of your life is a horrible thing to experience so the fact Laura was able to see the positives is a great illustration of her character.

“We believed this case was a straight forward issue of a property owner being negligent by not taking reasonable steps to reduce avoidable risks so I am glad we were able to help Laura recover her losses and wish her and Calum the best for the future.”

Laura's successful claim was reported on by the Edinburgh Evening News and the Daily Record.