Ian McDonald had his hand amputated after he was injured by faulty cutting gear.

The 37-year-old firefighter from Bishopbriggs, Glasgow needed 40 operations after a high-pressure jet of hydraulic fluid pierced through his leather safety gloves and poisoned him.

Although the Fire Brigades Union (FBU) offered great emotional support, Ian refused their legal assistance - something not all union members are aware they can do.

Instead, Ian turned to Digby Brown Solicitors and thanks to our expertise in personal injury and amputation cases our Glasgow-based Partner David Nellaney secured rightful compensation as well as access to the best possible prosthetic experts.

Ian said: “I understand the NHS can’t afford fancy prosthetics but the hook has limited uses while my new arm restores more normality to my life.

“I can hold mugs, phones, change my daughter’s nappy and after adapting my steering wheel the DVLA confirmed I could still drive.

“I’m glad had the support of the FBU but I’m even happier about the decision I made to seek independent legal advice - just because you’re a union member doesn’t mean you have to use their legal agents and I’d strongly urge others to ask around like I did.”

By accessing the right experts, we learned the hose pipe connecting the generator to the cutting gear was covered with tiny punctures which can appear as a result of the hose pipe being dragged over broken glass or metal shards at incidents.

The married father-of-four was in agonising pain and underwent more than 40 operations in an attempt to ‘flush out’ the toxins - but in the end medics were forced to amputate.

Ian added: “When I heard the full hand had to go the idea of being pain-free made it easier to accept.

“It got to the point where the surgeons were saying ‘It’s the hand or your life’ so it was an easy trade.

“I’ve still a way to go but after the support of my family, the doctors and colleagues I finally feel like the dark days are behind me.” 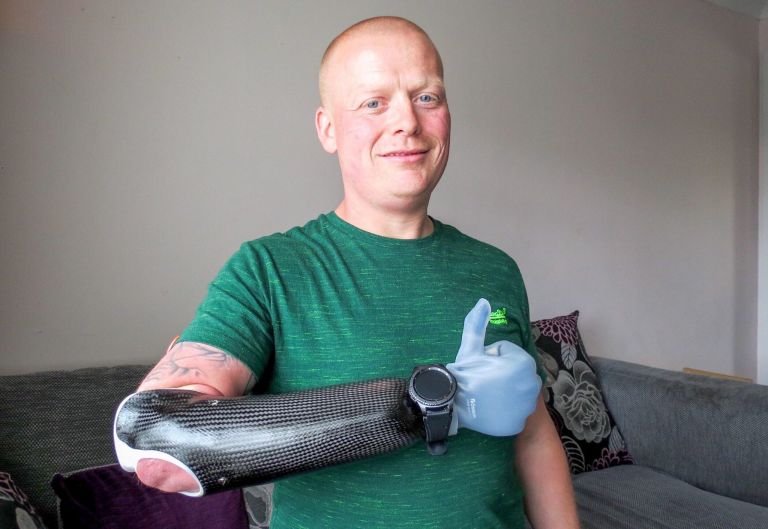 Employers - no matter the sector - have a duty to provide employees with: the right training; a safe working environment; and the right safety equipment.

However our legal experts found the Scottish Fire & Rescue Service had an inadequate system of inspection and maintenance for equipment despite knowing about the risks of punctures to the hose pipe.

We also found there were protective coverings for the hose which would have prevented Ian’s injury but they were not used.

David Nellaney said: “The SFRS is undoubtedly a safety-conscious organisation that provides an invaluable service but on this occasion it failed in its duty of care to an employee.

“Ian has shown courage throughout his recovery but he and his family suffered physically, emotionally and financially through no fault of their own.

“No settlement can alter the past, but it can improve the future and in Ian’s case, it will provide access to ongoing medical treatment and ease the financial implications of this workplace injury.

“Additionally, I’d hope this case has resulted in SFRS personnel benefiting from improvements to the safety of their equipment and procedures.”

Ian’s incredible recovery story was reported in the national media last week with the BBC and Daily Record among some examples.