A couple of weeks ago, fleet-footed staff from our Dundee office took part in the Business Fives Tayside corporate football event – a five-a-side football tournament where companies compete to raise money for a charity of their choice.

Our team took to the field on behalf of local mental health charity, Wellbeing Works, who are Digby Brown Dundee’s chosen charity partner for 2019. Kicking-off to a great start, our team made it all the way to the regional final, where they eventually met their match. The game ended with a heated penalty shoot-out, and our Dundee office finished admirably as runners-up.

Although complete victory wasn’t on the cards that afternoon, our team managed to gain themselves a well-deserved place in the national final. Local trainee Matthew Keogh was even given the title of “man of the match” by Scottish footballer, Robert Douglas. 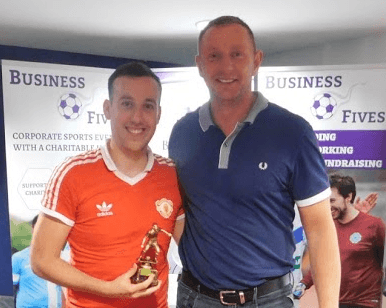 Before the game began, our Dundee staff had baked a delicious selection of cakes and held a raffle in the office to raise money for the charity. In total, the team raised over £140.

Previously known as the Dundee Association for Mental Health, Wellbeing works are a Dundee-based mental health charity who have been improving the wellbeing of those struggling with mental health challenges for more than 50 years. They help those in need to build their confidence and develop new skills, as well as bringing people together and creating a positive impact in the local community.

The Dundee office will continue to work hard and fundraise for the charity throughout the year. The next charity fixture will be a local charity quiz on the 19th September, followed by the Business Fives National Final on 27th September.

If you’d like to help our Dundee office raise funds for Wellbeing Works, you can donate to the Dundee JustGiving page here.