My brain injury made me a gambling addict

Our Head Injury Information Day (HIID) in Glasgow next week is set to hear from a former soldier, whose brain injury triggered a gambling addiction, leading to thousands of pounds of debt.

Fraser Howie, aged 25, said: “I was completely oblivious to my gambling addiction – I just thought I was playing online games but had no idea it was causing such huge problems.

“People tell you about things that’s going on around you or actions you are doing which aren’t typical but I didn’t see the changes myself.

“Only about two years down the line was I able to spot the issues but by then a lot of harm had taken hold – least of all was that I was £12,000 in debt due to the gambling addiction brought on by my brain injury.” 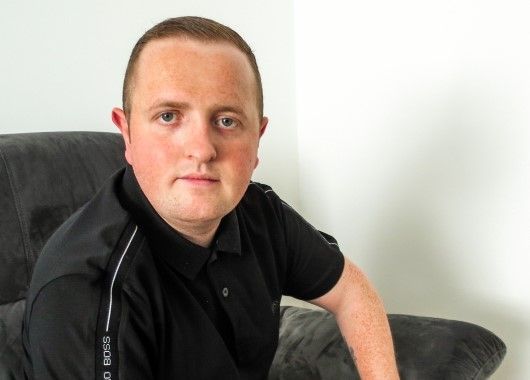 Fraser Howie was only 18-years-old when he was passenger in a car which spun off the road and hit a tree after the driver swerved to avoid a pothole. He was on home leave from basic training with Royal Regiment of Scotland at the time.

The crash left him with multiple injuries including a broken neck and an acquired brain injury (ABI). He completely lost his sense of smell and the unseen damage to Fraser’s personality proved life-changing – he developed an addictive personality disorder and behavioural issues.

It wasn’t until his visible injuries were resolved that people realised the teen had changed.

“At first we joked about how my lack of smell made me use too much aftershave.

“But over time people saw me get unnecessarily angry at trivial things or act erratically like when I went to Belfast for the day on my own.

“These things can be tough for loved ones to handle because yeah, they pick up the pieces but it’s pieces they don’t recognise – yet it makes me all the more grateful for their support.”

Fraser from Paisley will speak about his experience during a talk on addictive behaviours at our Glasgow HIID event taking place on Wednesday 16 May.

Fraser, now ready for work after rebuilding his life, admitted he still struggles with public perception. He said: “It’s an out of sight out of mind thing – if you see a wheelchair user or blind person you are more likely to be sympathetic or adjust your actions for them.

“But with a brain injury it’s assumed you’re stupid as you struggle to read or you’re on drugs because you walk or talk differently – it can be lonely and frustrating because you don’t feel understood.

“However my life is my own again and I would encourage other survivors to simply not give up.”

He added: “Fraser’s ABI was a diffused injury where a whole area like the frontal lobe is affected rather than one precise part.

“In these cases it causes difficulties in planning, short-term memory, multi-tasking or triggers addictive behaviour but Fraser is a great example of how ABI survivors can recover and thrive.”

Chris Stewart, Partner and head of the Serious Injury Department at Digby Brown, is hosting the Glasgow exhibition.

He said: “Sadly we encounter cases like Fraser’s every day but it makes his account all the more important in the hope of inspiring other survivors, their friends, family and carers.

“That is why we are committed to ensuring people have access to the best legal advice possible to help them regain control of their future.”

This story was reported by various publications which you can read below.

The Scottish Sun: 'completely oblivious' Scottish army veteran racked up thousands of pounds in debts after brain injury ‘turned him into gambling addict’