Last Tuesday evening, members from Digby Brown were invited to the training grounds of Caledonian Crushers for a friendly match.

The club was formed back in 2010 after being inspired by Michael Kerr, the only Scottish player in the Great Britain Wheelchair Rugby Team.

They are still the ONLY wheelchair rugby club in Scotland and from their base in Glasgow, they attract players from all over the country including Perth, Edinburgh, Alloa and Galashiels.

Members from Digby Brown that took part in the game included Chris Stewart, Partner and Head of our Serious Injury team.

“It was great fun to play alongside the Caledonian Crushers once again. Not only are they an inspirational group of athletes who are dedicated to their sport which has seen them go from strength to strength over the last nine years, they are also a welcoming and inclusive group.

“On the night we visited it was great to see the way in which they welcomed a new player into the squad." 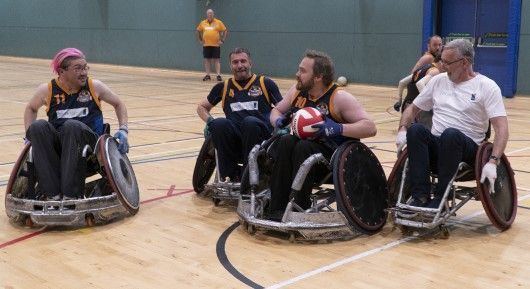 Digby Brown also presented the club with a cheque for £2,500. We have been proud supporters and sponsors of the Caledonian Crushers since 2014.

You can read more about the Caledonian Crushers at https://www.digbybrown.co.uk/caledonian-crushers-rugby-wheelchair-club