WARNING! Please note that this article contains a graphic image of injuries which our client has agreed to share.

Connor Penman, a 29-year-old bricklayer from Kirriemuir, Angus won a legal action against his former employer.

Mr Penman secured £70,000 in damages after his fingers were crushed in a chop saw, protecting his family’s future.

He said: “My middle finger and forefinger were just hanging off - I’m okay when it comes to pain and stuff but with this I remember screaming.”

At the time, Connor was working for a local builder. Business was quiet so he was tasked with extra duties and ordered to cut up pieces of wood to later sell as firewood.

However, he was a bricklayer which meant he had never had to operate a chop saw that spun up to 50,000rpm.

Mr Penman said: “My boss just told me to get on with it and left me to it - I was on my own so there was no one else around to ask for help.

“I was left to guess how to use this machine and there was an issue with the guard that protected the blade.

“It was all a blur but I think the guard pinged back after the blade jammed when it hit a nail in the wood - this then caused the whole machine to kind of lurch and it caught my hand.”

Mr Penman was rushed to Ninewells Hospital in Dundee where he received an emergency seven-hour operation. Despite the severity of his injuries, medics performed a vein transplant and saved his hand. It took four months to heal. 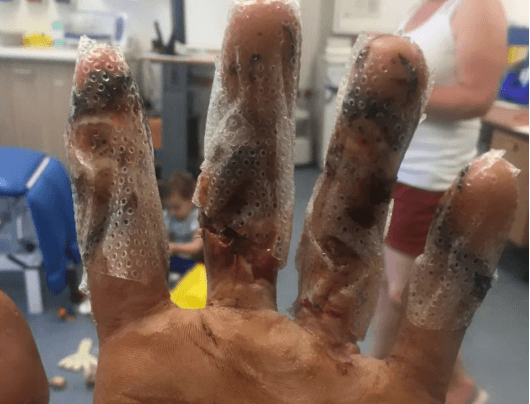 He added: “Although my hand will never be the same, winning the legal case means I can make up for lost wages, get a mortgage for a home and get the recognition I needed to prove I was right and prove my boss was in the wrong.”

We proved the construction company was negligent because they did not give Mr Penman the training required to operate the chop saw.

They also failed to risk assess the task and provide Mr Penman with appropriate equipment to safely carry out the task.

Robert Kernaghan from Digby Brown’s Dundee office said: “Agreeing to do a dangerous task when asked by your employer does not mean you have less rights in the event something goes wrong.

“The law is clear - employers have a legal duty to provide a safe working environment, safe clothing and the training needed to safely operate equipment and that is true whether the workplace is in construction, an office or offshore.

“Our investigations showed the construction company failed in its duty of care so we are pleased to have helped Mr Penman secure rightful damages. I wish him all the best on his next steps.”